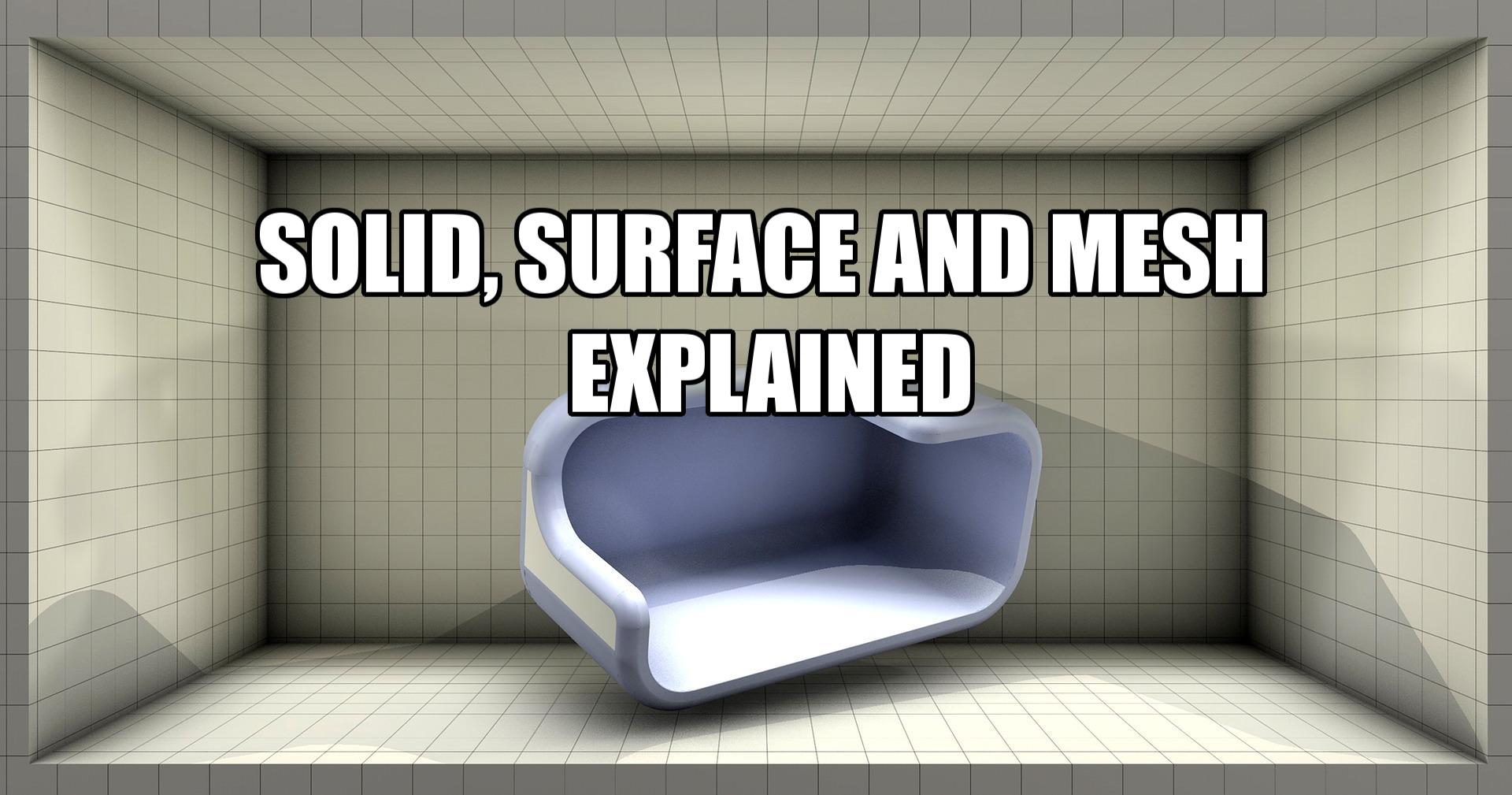 There are three different formats you can work with in the 3D design process: solid, surface, and mesh. In this article, we’ll briefly explain these formats and what applications they are typically good for.

The Three 3D Design Formats and What They’re Good For

Solid modelling involves working with pre-defined shapes, such as cubes, cylinders, spheres and other polyhedrons, to add features or cut material away. It is typically used in mechanical and construction based applications, where specific parameters, measurements and shapes are more defined. Objects can also be cut open to reveal their internal features, and even stress tested as if they were objects in the real world. Solid modelling can be difficult to work with if you’re wanting to design more organic, amorphic shapes, so is less suited to artistic and creative applications.

With surface modelling, you work with vectors and tangents, manipulating the shape by “pulling and pushing” on control points (generally where tangents intersect) to fashion shapes that are more amorphic or fluid in nature. You can easily twist, turn, and bend surfaces. With surface modelling, you can design more organic shapes which would be hard to design in solid modelling software. Therefore, surface modelling is typically used by artists who wish to create pieces which have a focus on aesthetics and flow.

Mesh modelling is similar to surface modelling. However, every curved surface, unlike the perfectly smooth vector surfaces you get with surface modelling, is made up of numerous flat triangular polygons. These polygons can be thought of as “pixels”, with each object having a defined resolution. In other words, the more polygons, the smoother the object appears. However, when you zoom in close, you’ll notice that the polygons that make up the curved surface are still flat. This may seem a little backward, however, it means that complex objects are easier to define mathematically. Therefore, mesh based models are easier to display in a range of different 3D design programs, and less data intensive when it comes to 3D printing the object.

Mesh modelling also makes it easier to add more photo-realistic rendering, texture and shading. Therefore, it is often favored by artists wanting to create more amorphic and organic designs, or animators who want to fully design and rig objects. It also offers the ability to adjust smaller details (polygons) within a shape without adjusting its entire form of the surface.

Solid or Mesh for 3D Printing?

Due to the simpler mathematics associated with mesh based designs they are less data intensive. This makes mesh formats more suited to 3D printing.

Sticking with mesh for 3D printing also has a number of other benefits. 3D CAD design programs, such as SelfCAD, allow you to easily import already designed objects from huge databases such as MyMiniFactory and Thingiverse and 3D print them with ease. These objects are provided in an STL file format, which is most common mesh based file and accepted by most 3D printers. You can’t really do that is a solid based design application.

In addition, with mesh based 3D design programs such as SelfCAD, using features such as loop, edge and vertex selection and editing, imported objects which are already in a mesh format can be easily adjusted and modified in accord with the user’s vision or design brief.

Other programs such as TinkerCad also allow users to import STL files and print predesigned 3D objects. The only problem is, there is a size limit on what can be imported. SelfCAD, on the other hand, can handle all the publicly available 3D objects.

We hope you have found this article useful. Got any tips about solid, surface and mesh based design? Be sure to share them with us in the comments below!

Feel The Peel, 3D printed cups made from oranges

3D printed glove to protect workers in the automotive industry